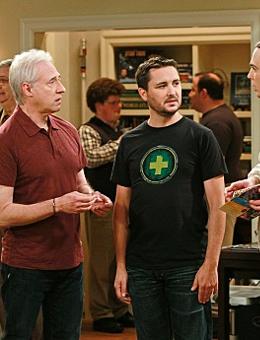 In the comic book store, Sheldon and Leonard examine a sword from "Game of Thrones". Sheldon would like to create a collection of fantasy swords Both are excited about the sword and want to buy it. Skillfully, Leonard succeeds in haggling down Stuart's price. Then, Wil Wheaton comes in and invites Stuart to his party. Sheldon and Leonard are also invited. Sheldon believes that Leonard plans to embarrass Wil there in front of his friends. After all, Wil is Sheldon's sworn mortal enemy. But Leonard actually considers going with Raj and Howard.

At dinner with the girls in the apartment, Sheldon is still offended that Leonard wants to go to Wil's party. This puts their friendship into question. Then Howard comes in and reports that NASA has adopted his design and plans to send him with the team into space. Everyone is excited, but Bernadette is skeptical. Especially when she learns that Howard is taking off from Russia.

Bernadette is mad on the way home. She would have liked Howard to have spoken to her about it beforehand. She is afraid for him and wants most to forbid him.

Sheldon is still mad at Leonard, and applies the experiment of Schrödinger's Cat to their friendship. Amy does not understand the problem with Wil, and she has the story told to her. Back when he was a little boy, Sheldon went to a convention where Wil was an invited guest. But he didn't come. Sheldon was deeply hurt.

In Howard's room, Bernadette reconciles with Howard and allows him to fly into space. She disappears from the room under a pretext, and shortly thereafter one can hear Howard's mother bellowing that she will not allow Howard to do it.

Howard tells his friends the next day that he kicked out Bernadette in the night. He demands that Bernadette accepts his apology. However, Bernadette sits with Penny and slowly realizes that she has made a mistake. She wants to apologize.

Raj and Leonard leave for the party. Therefore Sheldon wants to terminate their friendship. But then he learns that the actor Brent Spiner will be there. Nevertheless, he can hold himself back.

Bernadette visits Howard to apologise to him. Howard explains to her that she must accept that he still has further plans. During their kiss, his mother yells upstairs that, nevertheless, he will not fly.

At the party Sheldon shows up at once. He doesn't want to risk his friendship with Leonard--and he wants to meet Brent Spiner. Wil gives him a brand new signed action figure. Sheldon is touched and when Brent Spiner opens the package, Sheldon freaks out. He wants to put Brent Spiner on his mortal enemy list.