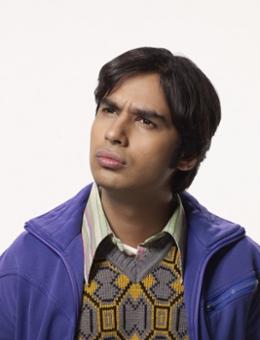 Rajesh Ramayan "Raj" Koothrappali, Ph.D., is an Indian astrophysicist and Howard Wolowitz's best friend. He often hangs out in Leonard's and Sheldon's apartment. Originally from New Delhi, Raj has an Indian-English accent and, ironically, dislikes Indian food and Indian culture. Raj repeatedly represents himself as the poor young Indian who grew up in modest circumstances in poor India. However, he is repeatedly brought back down to earth by his friends as his father is a gynecologist, drives a Bentley and has a house full of servants. Raj often communicates with his parents, who live in India, via video chat, and who regularly want to marry him to some woman or to inquire when he will marry and have children.

Very striking is a case of selective mutism which makes it impossible for him to talk to women outside of his family. In the presence of women he communicates using gestures or whispers something to Howard, who then speaks for him. Only under the influence of alcohol or psychotherapeutic drugs he can get around this problem; the amount of consumed substances is to decide whether he is a scientist or a macho man. Despite this hurdle Rajesh repeatedly has success with females. He even ends up in bed with Penny at the end of the fourth season even though does not result in sex.

Raj's best friend is none other than Howard Wolowitz. The relationship between the two is purely friendly, even if it is riddled with latent homoerotic undertones which are discussed and analyzed repeatedly by the psychologist Beverly Hofstadter, Leonard's mother.

At the beginning of the series, he explored the trans-Neptunian objects. However, his research comes to a dead end and has to admit that he can come up with absolutely no results. For fear of losing his job and thus his residency permit, he changes his research topic and subsequently works with, specifically for, Sheldon.

Dr. Rajesh Koothrappali is an astrophysicist and member of the faculty at Caltech Physics Department. For his discovery of a planetary object beyond the Kuiper belt, 2008 NQ17 (which he names "Planet Bollywood"), he is included in People Magazine's "30 Under 30 to Watch" was added, and which gets him a form of celebrity status and a larger office. Furthermore, he is also known for a publication on the Kuiper belt object size distribution.