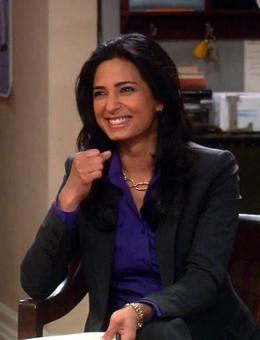 Priya Koothrappali is the younger sister of Rajesh Koothrappali, and is therefore protected under his eagle eyes as long as she is staying in Pasadena. Priya has studied law at the University of Cambridge in the UK, and has a license to practice law in India, the U.S. and in the United Kingdom.

She first met Raj's friends in 2005 and Raj made Leonard and Howard swear that they would keep their hands off his little sister. Nevertheless Leonard and Priya click and the two have a short affair, however Priya ends this and goes back to India. After Priya had received her degree, she once again visited Pasadena, where the secret, sexual contact between her and Leonard, who was by this time split up with Penny, was renewed. Leonard's roommate Sheldon caught Priya as she tried to sneak out of the apartment and came to know the secret, and consequently it could not be hidden from Raj any longer.

Raj was naturally mad at Leonard, but pleased that Priya didn't want to have a serious relationship with Leonard and returned to India shortly afterwards. However, in the legal department of a major Indian car manufacturer, she often had to travel around the world and eventually came back to Pasadena for a longer period. This time she finally began a relationship with Leonard, which again led to friction with her brother Raj.

Penny, still Leonard's ex-girlfriend during this time, had mixed feelings at first, but became increasingly jealous. So it happened that Priya became a serious opponent for the women's trio of Penny, Amy and Bernadette. She did not get along so well with three of them.

After a few months Priya returned back to India, but she and Leonard held a long distance relationship. But the relationship does not last for long.