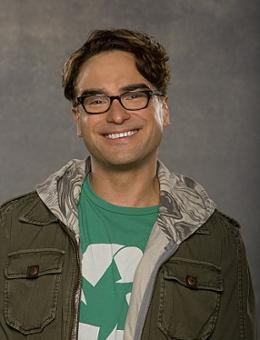 Galecki was born in Bree, Belgium, to American parents of Polish, Irish, and Italian descent. His mother, Mary Lou (née Noon), was a mortgage consultant, and his father, Richard Galecki (deceased), was a member of the U.S. Air Force stationed in Belgium and also worked as a rehabilitation teacher. Galecki has a younger brother, Nick, whom he describes as a "mechanical genius" in the automotive industry, and a younger sister, Allison. Galecki grew up in Oak Park, Illinois.

During an interview with New Zealand radio station ZM, Galecki recalled his childhood relationship with his mother. As a child, he was well known for making up long stories and tales. In such situations, his mother used to make him play the "quiet game", where he had to see how long he could go without talking. He also recalled that despite being a loving mother, she was also very tough. One phrase she would lovingly use was, "I love you, now get out."

Galecki made his acting debut in the 1987 CBS miniseries Murder Ordained with JoBeth Williams and future Roseanne co-star John Goodman. In 1989, Galecki portrayed Rusty Griswold in National Lampoon's Christmas Vacation. One of his best known roles was as David Healy (first introduced as Kevin Healy) in the U.S. sitcom Roseanne. He also appeared in the 1995 music video for the Dave Matthews Band song "Satellite". Galecki was cast in the 1997 summer slasher I Know What You Did Last Summer and the 1998 dark comedy The Opposite of Sex. In the year 2000, Galecki reunited with Opposite of Sex director Don Roos, who cast him in Bounce.

Galecki continued his film streak with roles in Suicide Kings (1997) and brief bit parts in high-profile films such as Bean (1997) and a minor supporting part in Vanilla Sky (2001). Galecki played a young delinquent in A Family Torn Apart, a 1993 TV movie based on a true story about a serial killer. He was also in the 2003 film Bookies, a comedy thriller film written by Michael Bacall and directed by Mark Illsley. The story revolves around the lives of four college students. Galecki appeared as a golfer in a 2005 episode of My Name Is Earl entitled "Stole Beer from a Golfer".

He played a character named Trouty on TBS's sitcom My Boys. He also played the half-brother of the main characters, sisters Hope Shanowski and Faith Fairfield, in the sitcom Hope & Faith. In late 2006 and early 2007, Galecki starred in the Broadway play The Little Dog Laughed as a prostitute called Alex. In this role, he was required to do a full-frontal nude scene, the first of his acting career. "At its core, the play is about what we all sacrifice to be successful, whatever our careers or goals," he explains. Galecki originated the role earlier in 2006 at Second Stage Theatre. The widely popular comedy by Douglas Carter Beane had a successful run at Second Stage and moved to the Cort Theatre. The play closed on February 18, 2007, with Galecki taking home a 2007 Theater World Award for his performance.

Galecki currently plays the role of Leonard Hofstadter in the CBS sitcom The Big Bang Theory, which debuted September 24, 2007. He was originally asked to play the role of Sheldon Cooper, but he said he was better suited for the role of Leonard Hofstadter. Two of his former Roseanne cast members have appeared on the show. During his role as David Healy, Sara Gilbert played the role of his longtime girlfriend and later wife, Darlene Conner. She has appeared as Leslie Winkle, a colleague. Laurie Metcalf, formerly cast in the role of Roseanne's sister Jackie Harris has appeared as Mary Cooper, mother of Leonard's roommate, Sheldon. Galecki is a cellist, a talent which has been used on the show. As of August 2013, Galecki and his Big Bang costars Kaley Cuoco and Jim Parsons each earn $325,000 per episode.

Galecki appeared briefly in the 2008 superhero comedy Hancock, alongside Will Smith and Jason Bateman. In July 2011, Galecki played a parody version of himself in three episodes of Entourage. He also appeared in the film In Time (2011) with Justin Timberlake and Amanda Seyfried.

He owns 360 acres (150 ha) of land in Santa Margarita, California. His property includes vineyards and a log cabin. While working on The Big Bang Theory, Galecki dated his co-star Kaley Cuoco for two years, just as their characters dated on the show. Galecki and Cuoco have since remained on good terms.. He is now dating actress, Kelli Garner.